Thousands of smallholder cocoa farmers in the Wassa Amenfi East Municipality of the Western Region of Ghana say they risk losing their farms in the coming weeks, as their landlord pushes through his plan to chop down all cocoa trees to raise an oil palm plantation instead.

The cocoa farmers numbering about four thousand and drawn from 13 cocoa-growing communities in the Dikoto-Nsuaem Traditional Area of the municipality vehemently oppose the idea.

Per unofficial estimates, about 200,000 acres of cocoa farms could be destroyed if authorities do not intervene urgently.

According to reports, the traditional ruler of the area, Nana Ntiako Agyiri II, is actively pushing through a plan to establish an oil palm plantation and milling plant as part of his development agenda for the area.

But the current occupants of the land, including indigenous Wassa people and migrant farmers, are opposed to the chief’s plan.

Seventy-year-old Madam Afua Kyirasoh said, “I will not agree to any project to cut down my cocoa farm handed down to me by my late parents. It is what has sustained my family all these years and it will remain so.”

A widow, Ama Lucy Asapaka, originally from Bolgatanga in the Upper East Region, said her family has been working on their 7-acre cocoa farm at Nsuaem since the 1980s when she and her late husband, Peter, migrated to the area.

Madam Asapaka said she is shocked at the chief’s decision and fears it would rob her family of the only livelihood they have known for 40 years if nothing is done.

The queen mother of Wassa Nsuaem, Nana Dankwaa Kyerepong, recalled that her uncle had experimented with an oil palm plantation in the town years ago, but abandoned the idea after he observed it did not support intercropping with staples like cassava, plantain and vegetables.

She, thus, maintained that Nana Ntiako Agyiri’s oil palm plantation project will adversely affect food security in the communities, adding her people have no plans of vacating their ancestral land for the Indian investor.

“I am 53 years old and I was born here at Appiahkrom, but my family is originally from the Ashanti Region. I currently am the caretaker of my family’s 19-acre cocoa farm that caters for my father, his eleven children and scores of grandchildren,” Yaw Bioh shared.

Bioh alleged he recently, together with other migrant farmers, paid various sums of money to the chief to renew their lease agreement, and was therefore baffled by the eviction notice.

The chief of Dikoto Junction, one of the affected communities, Nana Ayeh Gyampoh III, contended that several appeals to the traditional ruler to reconsider his decision fell on deaf ears, forcing them to petition the paramount chief of the Wassa Amenfi Traditional. But that they regretted also yielded no positive outcome.

Assemblyman for the Dikoto Junction Electoral Area, John Bawuah, confirmed the narrative of the aggrieved farmers, emphasising that almost all residents are against the chief’s plan.

The group has, therefore, petitioned EcoCare Ghana, a civil society organisation that specializes in environmental and human rights advocacy issues.

Obed Owusu-Addai, the Managing Campaigner of EcoCare Ghana, explained “we have followed up with the chief himself and he also confirmed…His main argument was that some of the migrant communities do not pay land rent, whereas others have their documentation expired and they’ve not come to do a renewal.”

He noted that his organisation took interest in the matter upon realising that the communities are cocoa growers. “The first angle is the human rights issue, where because there are migrant communities the chief wants to evict them and take the land and give it to an Indian investor. That is a human right issue that we are interested in and we want to advocate to ensure that their basic human right is not trampled upon.”

“And also, cocoa is a very important economic species which does well with trees. That is why are we are vehemently opposed to converting any farmland, be it cocoa or whatever farm, to mono-cultural oil palm plantation,” Owusu-Addai underscored.

He argued, “The Economic Plant Protection Act of 1979 says that that cocoa is an economic plant and you cannot just cut it without recourse to Cocobod and the laws of the state. He might have his right to the land as the overlord, but his right is also within the greater context of Ghana as a whole.”

Owusu-Addai maintained that EcoCare Ghana is not against the developmental agenda of the chief, but insisted “what we are against is that he should not trample upon the rights of the indigenes and the migrants on the land and also should not be something that will bring environmental difficulties to the people staying here.”

The joint leadership of the communities with support from EcoCare Ghana have petitioned the District Administration of Ghana Cocoa Board and the Forestry Commission.

They intend to raise the matter will in Accra with the top management of Ghana’s cocoa regulator, Cocobod.

But at Wassa Akropong, the capital of the Wassa Amenfi East Municipality, the Chief Executive of the Municipal Assembly, Frederick Korankye, received the group’s petition with a pledge to engage the parties for an amicable resolution.

“I promise the farmers, the CSOs and the stakeholders that I will do my best to see how best we can resolve this issue. I don’t want this conflict to degenerate into violence,” he expressed worry, adding “we will do our best to jaw-jaw so that both sides win.”

“I admit the fact that Wassa Amenfi is known for cocoa farming. It’s our major occupation in this municipality. The Cocobod Chief Executive also happen to come from this municipality, so it’s a major issue that we are not going to sit on. I will consult him as well and we will look for an amicable solution,” Korankye assured.

Meanwhile, the Chief of Dikoto, Nana Ntiako Agyiri II, has declined comment on the allegations levelled against him. 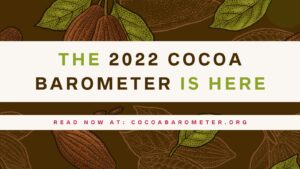 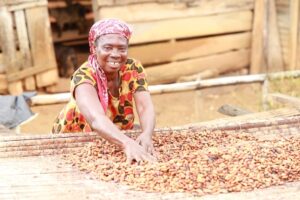