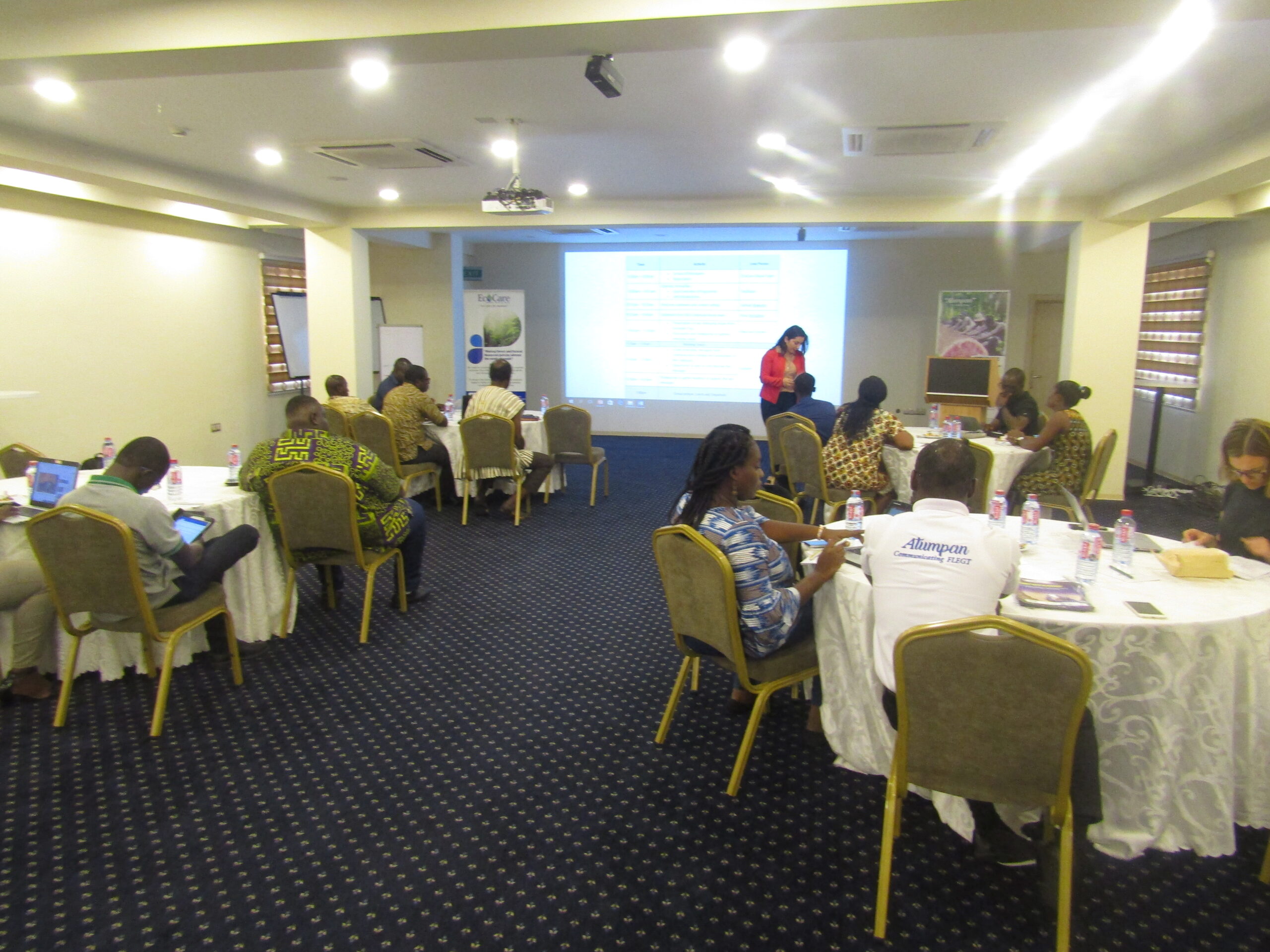 As part of EcoCare Ghana’s project, which is monitoring the cocoa and forest initiative commitments through participatory approaches (MoCCPA project), it was essential for the media to be trained and their capacity built in order for them to take active part in the implementation and monitoring process. The project which is financed by Rainforest Alliance/UTZ through their sector partnership (SP) program.

The program was attended by a cross section of journalist from all media circles like Print, Radio, TV Stations, Online Media and Freelancers.

The resource persons for the meeting were Mr Vincent Awotwe-Pratt who is the programs manager on Cocoa and Forest Initiative at the World Cocoa Foundation (WCF), Mrs Glowen Kyei Mensah who is also the programs manager on the Cocoa and Forest Initiative at the Sustainable Trade Initiative (IDH) which is a Dutch International NGO and Mr Obed Owusu Addai who is the cofounder and the managing campaigner for EcoCare Ghana.

Mr Addai in his presentation explained that the project looks at getting all stakeholders involved in the CFI. He believes that local farming organizations, farmer based organizations, civil society groups, media etc, must actively be involved in the monitoring process at both national and landscape levels in order to help make the CFI a success in Ghana. He disclosed that the MoCCPA project is monitoring the CFI commitments in two cocoa farming districts in Ghana, namely ATWIMA NPONUA and JUABOSO districts. He explained that the two districts were selected based on REDD+ reports which states that these districts are part of seven (7) districts in Ghana where cocoa farming is key and causing deforestation in forest reserves.

The programs manager on CFI at the world cocoa foundation, Mr Vincent Awotwe-Pratt in his presentation spoke about the cocoa and chocolate companies’ involvement in the CFI. He disclosed that the CFI has about thirty-four (34) companies involved in the project including two (2) local companies. He went on to say that all the private companies are working with WCF to aggregate their action plan with the national action plan as a guide.

Mr Awotwe-Pratt explained that the CFI focuses on three (3) thematic areas which includes: Forest Protection and Restoration, Sustainable Cocoa Production and Farmer’s livelihoods, and Social Inclusion. However, he included that the action plan would play an important role in taking care of carbon stocks in west African forest and help address the worrying issue of climate change, which also is in line with the Paris Climate Agreement.

Mrs. Glowen kyei Mensah also took her turn and addressed the participants about the history behind the formation of the CFI and its importance and necessity. She spoke about how far the initiative has gone and what has been done so far by stakeholders in both national and landscape levels. She urged all journalist present to partake in the implementation process and also get involved in the process.

A lot of the participants brought up issues concerning the CFI process which they feel bothers farmers and the nation as a whole. The resource persons took time to answer and explain matters to them for first hand clarity. Some of the issues included ownership of planted trees on cocoa farm lands, how sustainable the CFI will be, whether the farmers are aware and involved in the process or not just to mention a few.

Furthermore, Mr Owusu Addai urged and promised to assist with funding opportunities to any journalist who would travel to the project areas to monitor and write a story on CFI implementation process and also monitor its implementation.